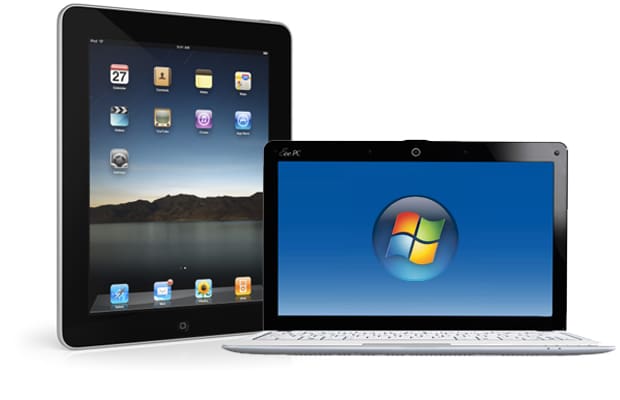 I will preempt this post with a small explanation as to the purpose of this comparison and how it evolved.  Our office has clear divisions, PC people and Mac people.  As with all offices that have this, the comments go back and forth quite often and can become entertaining at times.  The iPad, yet another grand edition to Mac’s repertoire, has become a talking point around the office.  So it has become my job to lay down a simple non-bias comparison of the iPad and the Asus 1005 Netbook (oh and I am the PC guy).

Well iPad wins.  I could stop there but I really must explain a few things and add my two cents to bring this thing down from its legendary status.  First and foremost it is sleek, thin and monotone.  This makes it easy on the eyes and welcoming.  With no need to open it up like the standard Netbook, it also provides the wow that people are not used to.  Now for the negatives…  Fingerprints on the iPad are a drawback, and with no options it can quickly become an issue.  The Netbook on the other hand can be customized with a matte surface, the screen is never touched, and the keyboard is standard.  Furthermore, the Netbook can be customized with colors, where the iPad cannot.

This is the true bone of contention!  I am here  to say there really shouldn’t be a comparison.  Now I know all the die hard fans out there are saying boo right now, but let me explain.  These two devices have different jobs in most cases.
The iPad with all of its apps and functionality doesn’t have the computing power or operating system abilities found on a standard Netbook.  The Netbook in turn, doesn’t have access to all the apps the the iPad has.  I found very quickly while using the Netbook that its computing power was outstanding, quickly opening large applications and processing requests just as if I was sitting at a normal PC.  The  issues I found were the tiny screen, the added weight(compared to the iPad), and unneeded pre-installed software. The bonus was my ability to load anything I want on this machine and it will run it.
The iPad’s limitations are  directly linked to its operating system.  Standard programs will not run on the iPad, but with its long list of usable apps that require far less processing power, it flourishes.  The quick response time with these apps is almost mind boggling, the email functionality and media access is without equal and the ease of use is absolutely awesome.

I can see the use for both machines.  I actually would like to have the iPad for organizational purposes,presentations, and quick access.  But the reality is, I cant stray from my PC ways.  The Netbook allows me to run all of my programs while being light in weight, small and easy to use on the fly.  I will still have all the traditional slow ways of accessing social networks, email, media and specific sites I may use often, but the pros outweigh the cons for my purposes.