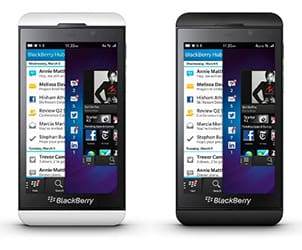 It’s all or nothing for Blackberry after the release of their Z10 Smartphone. The diminishing company is trying to stay afloat with this sleek, modern competitor for the iPhone and Android. But does it stand a chance against the two most sought after brands? Its hard to say at this point, but this phone does bring some new features to the table.

First of all the new operating system, a rather efficiently titled Blackberry 10, provides a much friendlier user interface than past blackberry’s. Those who have had the opportunity to test the product note its Goldilocks Effect, that is they say it is easier to use than the Android but is still not capable of surpassing the ease of the iPhone UI.

This phone has also not included a home button in its design, rather a swipe feature that allows users to unlock the phone and bring it back to it’s home screen. The blackberry swipe features are a big part of what makes it stand out, allowing users to easily navigate through four different states that your phone can be in:

Will it physically stand out on the shelves? Eh, not so much, it looks very similar to both of its competitors, slightly larger than the iphone and smaller than the Android.  Although one nice functional design perk is the ability to remove the back of the phone and add more storage by switching out a MicroSD card or changing your battery. The screen also has a higher resolution than its competitors, 356 dpi compared to 326 for iphone and 306 for Android. Check out the video below to see more features.

I have to add, although the phone offers some pretty stellar features that I’m sure future operating systems will follow suit to, I think it’s going to be very difficult, if at all possible, for Blackberry to stay afloat. It’s hard to see it holding any competition with the always popular Android and iPhone.What do you think?